Back to auction
You'll need to Sign in or Create a free account before bidding.
PrevLot 11 - Roderic O'Conor 12 / 82 Next Lot 13 - Paul Henry 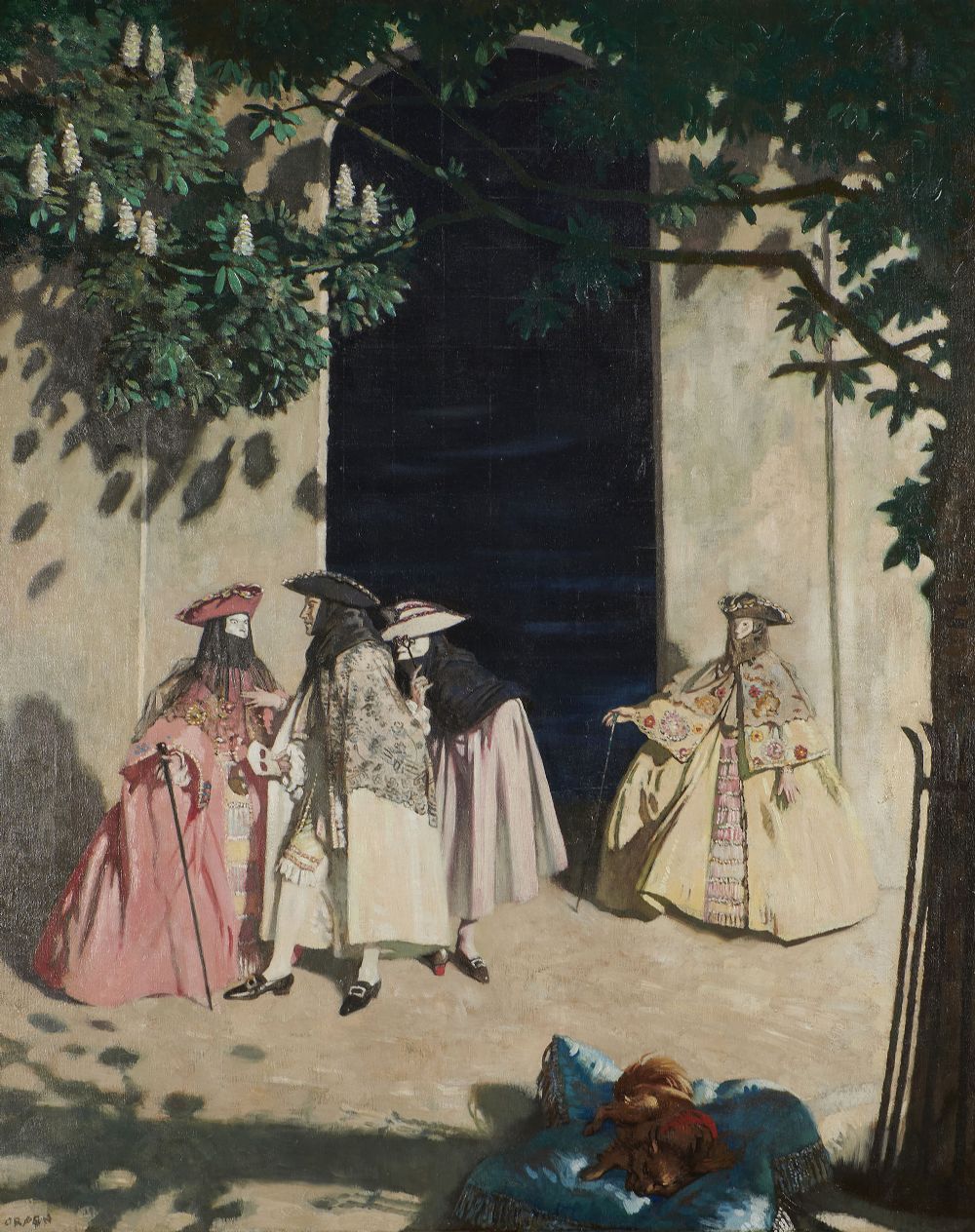 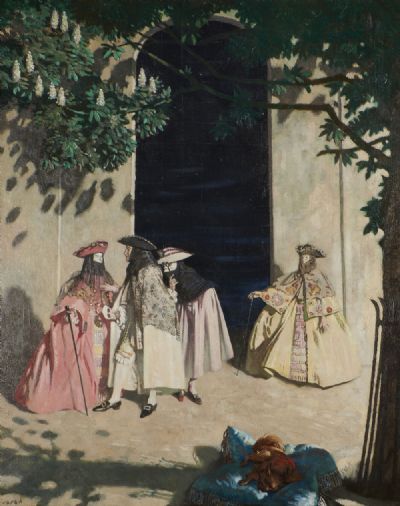 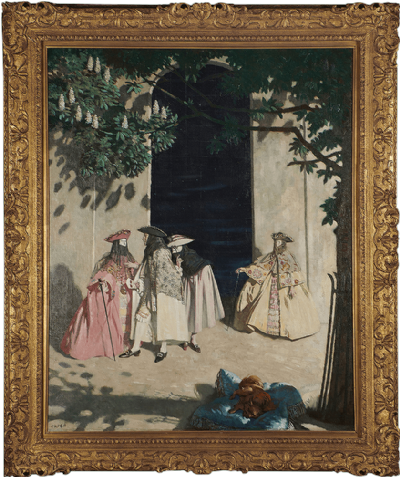 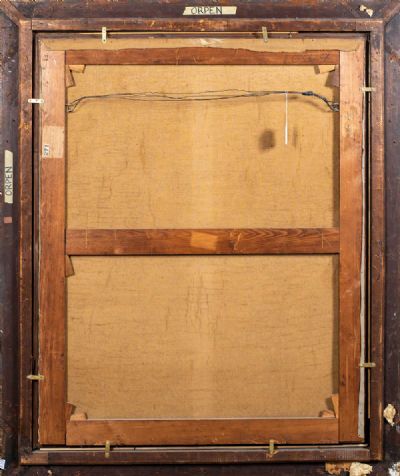 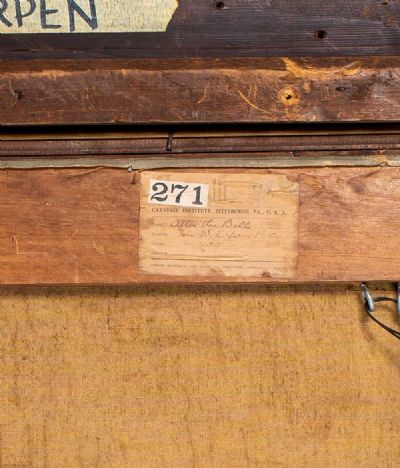 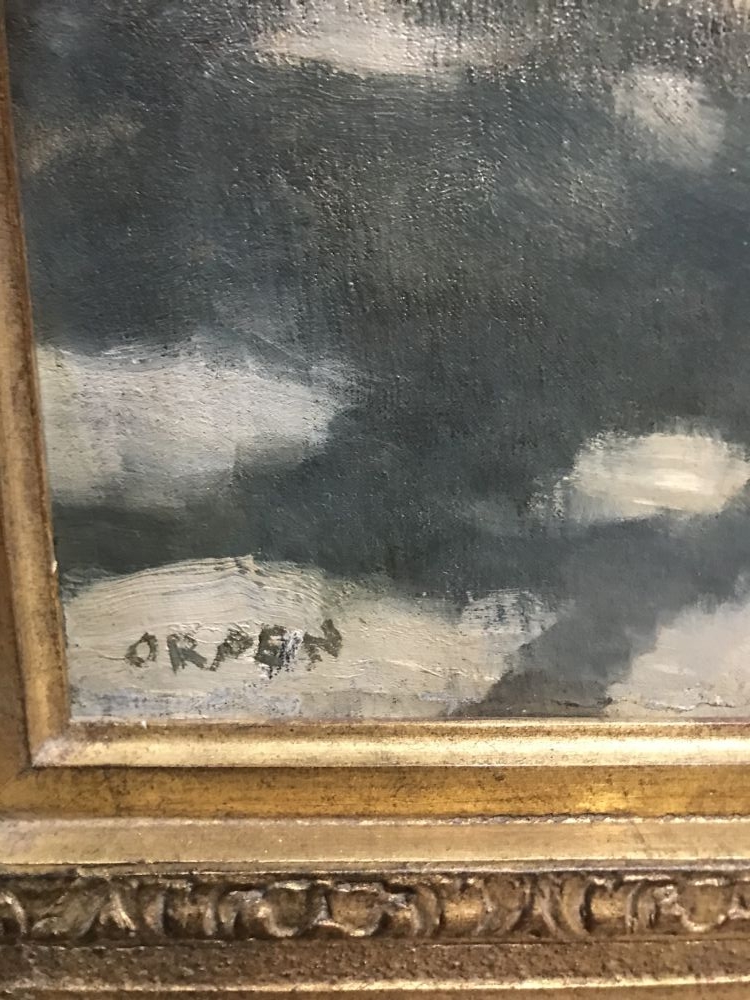 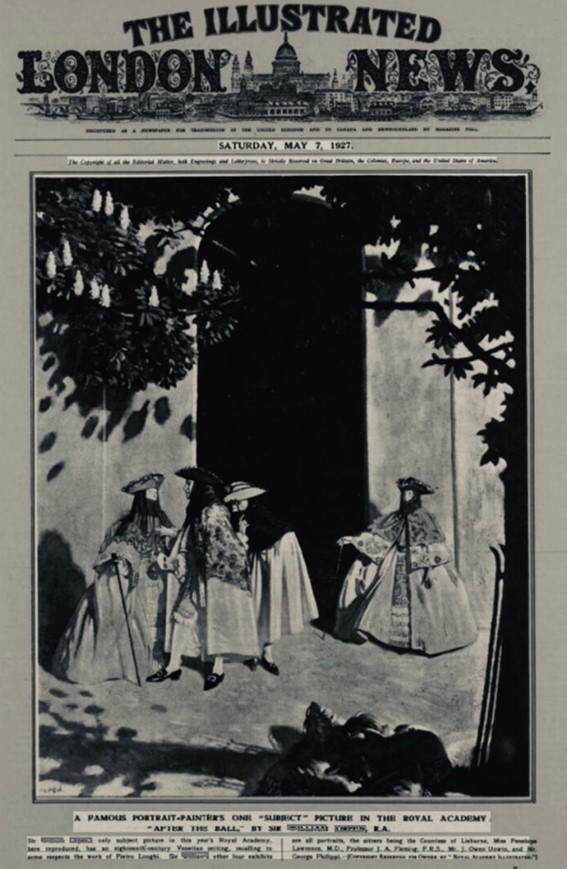 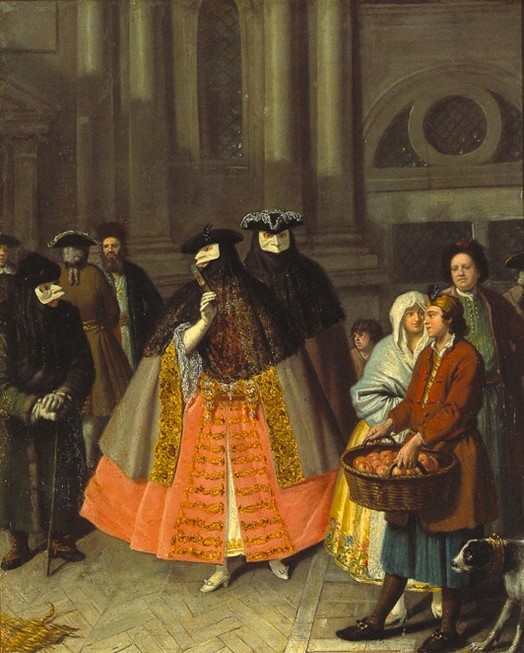 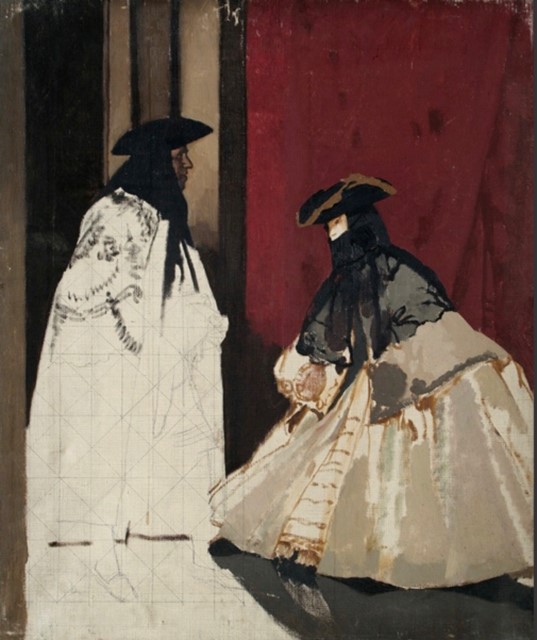 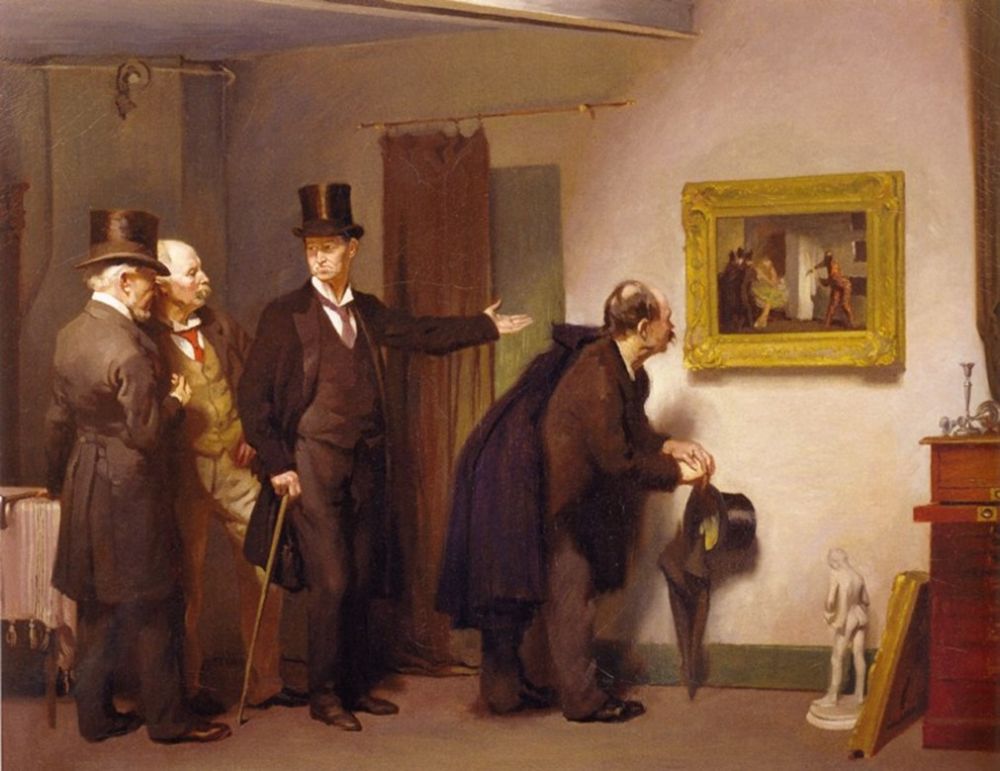 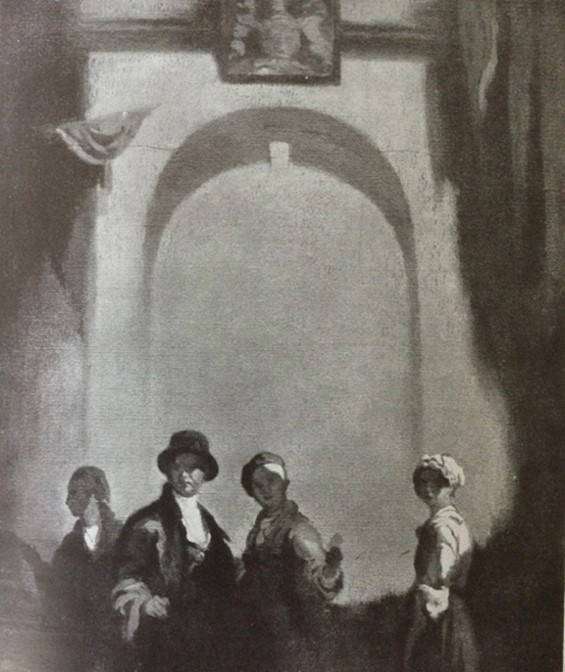 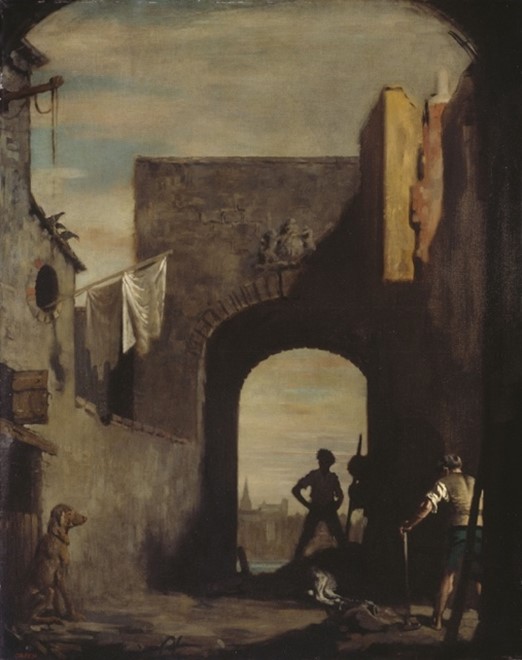 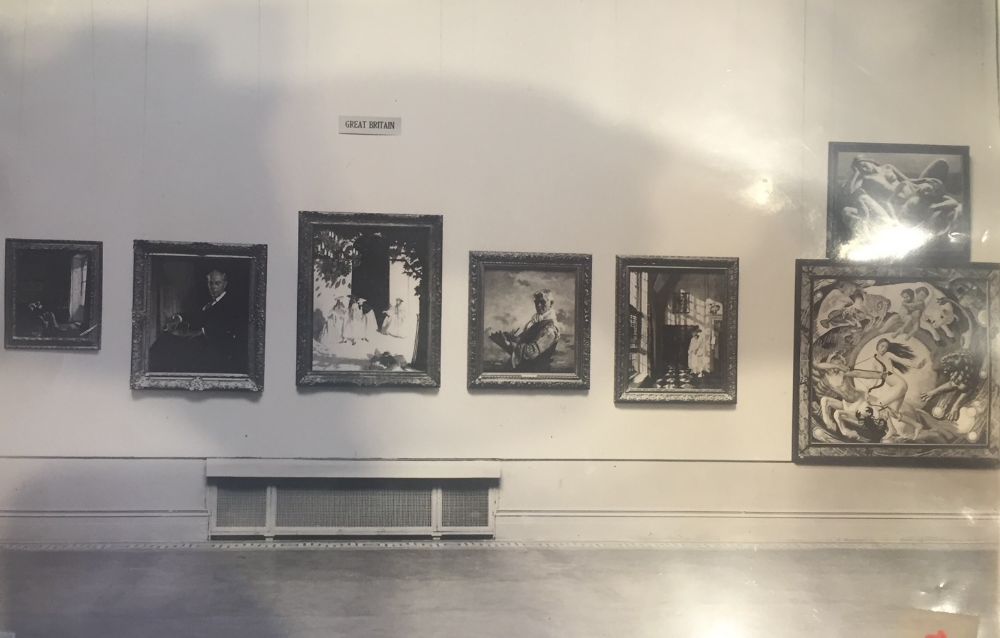 In a moonlit courtyard, after a masked ball, it is decision time. Who goes with whom, is being arranged and mystery attends the moment as final decisions are made? All four figures are heavily cloaked in eighteenth century fashion and three are masked. For Venetian aristocrats of the notorious age of social and sexual license, this covert activity during the annual carnival was not unusual.Â CarnivaleÂ - an ill-defined sequence of balls and celebrations held between St Stephen's Day and Shrove Tuesday, was a six or seven-week period when the republic permitted its prominent citizens to go masked in public. Rank was expressed not only in extravagant attire, but also in the very style of the mask (theÂ bauta) to be worn in these times.[1]Â The practice imitated ancient theatrical masks, particularly those of theÂ commedia dell'arte,Â the improvised public theatre that originated in the Venice Carnivals of the sixteenth century.[2]Â These archaic conventions persisted until the city fell to Napoleon's troops in 1797. Thereafter,Â CarnivaleÂ was banned in the nineteenth century while the city was under Austrian rule and subsequently, during the early years of theÂ risorgimento, only to be revived in the late twentieth century in the age of mass tourism.

Why then, would an artist - a notorious Irish portrait-painter in the 1920s - paint such a picture asÂ After the Ball?

The Twenties were Orpen's 'golden treadmill'.[3]Â According to his nephew, John Rothenstein, portrait commissions left no room for anything other than face painting and money poured in. When the wealthy New York lawyer, Thomas Lincoln Chadbourne, purchaser of the present picture, commissioned his portrait in 1928, he was charged Â£2,500.[4]Â In the previous year,Â After the BallÂ had accompanied five such portraits at the Royal Academy, while a similar number might be expected at other annual exhibitions. Rothenstein's claim that 'there was no time for reflection' is not however, entirely accurate.[5]Â Damaged beyond repair by his experiences on the Western Front, and the treatment of his commemoration of the 'unknown soldier', works of imagination were never completely forsaken by the artist, even if, by the end of the decade, with each successive sitter the strain became greater and greater. In the concert of newly globalized wealth, Jay Gatsby and the 'Bright Young Things', extravagant caprice and mild satire reigned supreme.

Orpen had never shied away from theatricality. His early Slade School sketchbook pages contain rapid notes of strolling players, while the cavalcade of pre-Great War self-portraits indicate a propensity for dressing up and striking a pose. Even in recent years, works such asÂ Fair at Neuilly,Â 1925 (Private Collection) spin complex allegories. However, the particular inspiration for the present work draws on deeper sources. ReproducingÂ After the BallÂ on its cover, theÂ Illustrated London NewsÂ informed its readers that the painting recalled 'â¦in some respects â¦ the work of Pietro Longhi' (fig 1).

To theÂ cognoscentiÂ the source was obvious enough. The painter of elegant refinement, Longhi represented a world seemingly untouched by pestilence and strife. His scenes ofÂ Carnivale, such asÂ Conversation between Bautas, (fig 2) reveal protagonists of the very type Orpen represents.[6]Â Orpen of course, removes the lower orders - the fruit seller and attendants who impinge upon Longhi's upper class Venetians as they proceed to aÂ ridotto.Â Â

The very fact thatÂ CarnivaleÂ had fallen from custom, practice - and grace - at the turn of the twentieth century, only increased its fascination. Orpen's revellers had, according to Konody, 'â¦ stepped out of the pages of Casanova'.[7]Â The male protagonist has removed his mask in order to address the female, a scene that the painter sought to represent separately and then abandoned (fig 3).

The undercurrent of assignation, so evident inÂ After the Ball, may well recall the work of Orpen's friend, Charles Conder, who had produced hisÂ CarnivaleÂ lithograph set in 1905 - were it not for the fact that the artist had already visitedÂ CommediaÂ subject matter.[8]Â InÂ The Valuers,Â 1902, (fig 4), four probate agents pictured in his New English Art Club painting of that year, have come upon a little picture that Longhi, or Francesco Guardi could have signed.[9]

Similarly, one might invoke James Pryde'sÂ The Vestibule,Â for its stage-flat arch and armorial, were it not that Orpen proposes his own precedent inÂ The Knacker's YardÂ (figs 5&6).[10]

In 1927, press coverage ofÂ After the BallÂ was favourable, even though in most instances, the painting was not fully understood. In front of it, some concluded that the artist must be having one of his 'bits of fun', aiming, perhaps, for a 'problem picture'. It was nevertheless, 'a picture that draws one through the crowd to look at it â¦' according to one reviewer, while for another it was,

An intriguing subject â¦ it is pure fantasy, but alike in arrangement and handling it is a gem.[11]

No-one questioned the figures, nor Orpen's exotic snoozing canine on its satin pillow, under a night sky in which the constellation of the Great Bear twinkles over the prelude to an illicit evening debauch. 'The spectator', wrote PG Konody, 'is left in doubt as to whether the light is the natural light of day or the artificial illumination of night â¦ whether the wall is a mere screen or solid masonry', but,

All this is of little consequence in aÂ capriccioÂ where everything is charm and grace and elegance, where the drawing is so exquisite, the colour scheme of subtle greys and whites with flashes of blue so entrancing, and the brushwork so lively and impulsive.[12]

For Orpen, such painterly qualities and poetic allusions were his way of addressing a world whose fragility would shortly be exposed in the Stock Market Crash. Ironically, by that pointÂ After the BallÂ had travelled to Pittsburgh to be shown in the Carnegie International Exhibition (fig 7), where it was the centrepiece of the 'British Art' display, and it would remain in the United States until its current repatriation.

Orpen was that rare thing - a scholarly painter. Unlike the average academic, his scholarship was in, and of, the visual. And thus, the ambiance of Longhi and Guardi could be recreated with remarkable skill, sympathy and subtlety. The message ofÂ After the BallÂ would not otherwise be so clear. One cannot help imagining that for one so educated as Orpen, the refrain from Browning'sÂ Toccata of Galuppi'sÂ must have echoed as he painted:

[7]Â Â Â Â Â Â Â Â Â Â Â Â  P[aul]Â Konody & Sydney Dark,Â Sir William Orpen, Artist and Man,Â 1932 (Seeley Service & Co), p.Â 182. Konody observes one curiosity about the picture that Orpen must have deliberately left as part of his puzzle - namely that 'â¦in stepping out, one of the figures displays a red heel where one would reasonably expect to find the toes'. This of course applies to the masked figure with the lorgnette and may be intended to portray a clubfoot.