Back to auction
You'll need to Sign in or Create a free account before bidding.
PrevLot 15 - William John Leech 16 / 82 Next Lot 17 - William Crozier 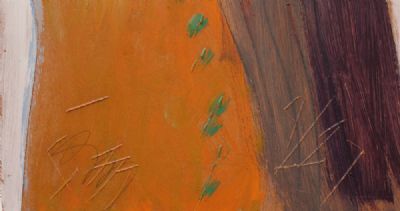 Although O'Malley eventually returned from Cornwall to Ireland in 1990... Read more

Although O'Malley eventually returned from Cornwall to Ireland in 1990 to live and work in Physicianstown, Co.Kilkenny, his birthplace, over the years he had often imaginatively returned there. He always felt an intense connection to his homeplace, with pictures like Night Window with Ash Tree & Harmonica Music evoking a time and place that still existed vividly in memory. O'Malley's starting point for a painting was always the visual world, which he then interpreted freely so that, rather than describing something literally, the picture expresses some elemental part of his experience.Â  Night Windowâ¦ conveys the rush of movement outside his window: wind, the fluttering leaves on the ash tree and the all-important (to O'Malley) birds. We get glimpses of beaks, wings, tails and eyes,Â  the latter introducing an unsettling totemic presence which is characteristic of the artist.

In this piece, the element of sound is particularly important. O'Malley once explained: 'There is music in nature all the time. Sometimes I make a landscape with the caw of a crowâ¦.' But in Night Windowâ¦ the sounds of nature outside the window are mingling with the lively tunes coming from O'Malley's harmonica (he played both the accordion and the harmonica).Â  In this painting it's not difficult to imagine the lively harmonica rhythms mingling with the sounds of nature; the shapes flow seamlessly into one another in a lively dance.Â  Those familiar with the artist's work will recognise a simplified self-portrait of O'Malley at the top of the painting, a subtle nod to the accordion player himself.

Like in so many of his paintings, this one draws on O'Malley's totality of experience, the seeing, hearing and feelingâremembering the enjoyment of that specific moment. He looks, feels, digests and then recalls a sensation, using this 'inscape' as the starting point for a visually satisfying abstract composition.